I don’t know how to fit in everything I have done in Nepal in one blog post, but i’ll give it a go…

I arrived on September 12th 2013 and was immediately made to feel at home by Bicky and everyone here at The Lighthouse. The other volunteers already knew who I was because my mum had been ringing up Bicky checking details of my trip over and over for the last week – but she really didn’t need to worry. I am 19 and have just started my gap year so Nepal was my first stop and I wanted it to go smoothly. It can be daunting coming to a totally new and different country, and with the amount of scams floating round the web finding a trustworthy organisation can be tricky, but with VCD you are in safe hands!! Over my whole time here I was looked after really well. Bicky always made sure there was someone to pick me up of drop me off wherever I needed to be, and I wasn’t once left confused or not knowing what I was doing.

During my 4 weeks with VCD I seemed to fit in an awful lot. I was lucky enough to apply to volunteer with the company while Bikram was in London so I met with him and planned my trip with him in person which was great. I told him a list of things that I wanted to do and he put together a 4 week program for me. I started off with two nights in Kathmandu during which Bicky showed me all the major sights including the Monkey Temple and Durbar Square, all on the back of his motorbike which was awesome fun. Then, I set off to Pokhara with another VCD volunteer from Australia, Jess.

Me, Struggling up the hill on the first day trekking! 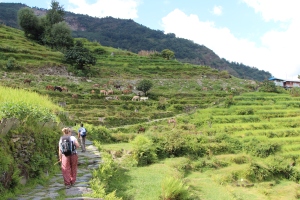 Walking to Ghorepani through a heard of mules.

We went there on a tourist bus and were dropped off and picked up at each end with precision. The trekking was a really good experience, we did the fairly popular Poon Hill trek over 4 days and were lucky enough to see the epic Annapurna range at sunrise through clear skies on the third morning. The trip was made particularly fun by our guide, Ram Paudel, a friend of Bicky’s. He was even kind enough to organize a paragliding trip for the two of us when we got back to Pokhara, which was amazing, as well as inviting us to his house for a traditional Nepali meal with his family which was a wonderful experience. I then did 5 nights at Pem T’sal Sakaya Monastic Institute teaching maths to the mini-monks. This was no where near enough time as I had only just got to know the students individually and could have happily stayed there for at least a month, but I wanted to fit everything in and on a tight schedule even spending a week there was a worthwhile experience.

Bicky then arranged everything for me to travel to Sauraha, Chitwan, where I would spend two weeks staying at the Orphanage Children’s Welfare Center. I felt really privileged to spend time with the kids there, who are so much fun, as well as Mommy, Jyoti and Didi – the women who run the place. After I had spent a week there, Bicky arrived with Jess who would join me for another week before our Jungle Safari. I had a great time with the kids the first week, but having Jess there too meant we could take them all out for walks to the river which I couldn’t do on my own, and was a great experience for all of us. Unfortunately, some of the children went off to visit family for Dashain festival so for the last 5 days there were only two children left (much quieter than the usual nine!), but Jess and I still had a great time taking them out and spoiling them! While Bicky was there dropping off Jess he bought a month’s worth of rice and lentils for the kids, so unlike with some bigger organisations, being here with VCD you can really see where your small donation goes – straight to helping the people who need it.

Relaxing at the orphanage with the children.

All of us enjoying juice by the river.

After two weeks watching elephants walk past my window four times a day, and only leaving Sauraha to raft for a day, I was definitely ready to go and do the safari myself! After dressing up in Sari’s and having a slightly emotional goodbye with everyone at the orphanage, we left to spend two nights at the Wildlife Adventure Resort. We did an Elephant Safari, Jungle Walk, Canoe trip, Village tour, Tharu Culture Dance show and even early morning bird watching all in two days, with plenty of time to relax in between – somehow! I felt a lot like a tourist at the resort after spending so much time living as a volunteer at the orphanage, but it was still very enjoyable and I will always remember watching Rhino’s bathing while on the back of an elephant! On my return from Chitwan I stayed with family friends in Kathmandu for another week before flying back to England.

I think Chitwan was my favorite part of Nepal I visited, but everywhere was a great fun. The crazy bustle of Kathmandu was hectic but definitely an experience to do, Pokhara’s peaceful lakeside and mountain views were breathtaking, but it had to be watching the elephants roam around Sauraha and head through the enormous wall of trees where the jungle and national park begins that helped Chitwan top it for me. The only thing I struggled with there was the humidity – it was boiling hot all day even with a cloudy sky, but we worked around it by getting up early and doing lots then napping after lunch when it was to hot to do anything.

Me and Jess in saris with Bimal, Bipana and Sanju.

At the Riverside on a morning walk with the kids.

Nepal is full of so much culture and history and I have only touched the surface in my 5 weeks here. Being a volunteer definitely allowed me to see into the lives of people here more than I would have as a tourist, and although the sights and places are awesome it was getting to know the people here that has been the most enriching part of my trip. My Lonley Planet guide listed ‘Nepali People’ as one of the top 15 attractions here among the trekking, rafting and jungle safaris, and it is not wrong. I found that Nepal was an awesome way to start my travels and I would definitely recommend VCD as a company to come here with. I personally plan to keep close contact with the recently titled non-profit organisation, and would love to be able to continue to help the people I have met here and will hopefully be able to meet again one day.

Thank you, Bicky, for organizing me an incredible trip and looking after me so well!